The ride through the mountains of Peru is finally at an end. That was a mere 3,471km of cycling laterally and 53,000 metres of cycling vertically that I will not forget in a hurry. There could not have been a happier nor more relieved cyclist than your correspondent as he crossed the border into Bolivia. It has been a wonderful challenge to ride border to border through the glorious mountain scenery of Peru but I’m so glad to have a final final blast across the plateau at 4,000 metres from Cuzco to the border and Lake Titikaka to bid adios to Peru.

Yes, riding Peru took endurance both physical and psychological, particularly enduring the ever-present chorus of roadside “Eer Gggrrringo!” (Non-cyclists will be blissfully unaware of this) and the near constant bleating of car horns.

I could return to Peru one day, under a somewhat bizarre set of circumstances. Perhaps if an enlightened Peruvian transport bureaucrat instigated a national “Let’s all jam our vehicle klaxons in our collective bottom-holes” Day.

The Peruvian battle between the decent and the irritating can, however, now go on without me. From the vantage point of Bolivia, where the horn and the “Grrringo!” have mostly been silenced, I can happily leave Peru to grapple with its inner moron.

Copacabana, eight kilometres inside Bolivia is on the shore of Lake Titikaka and is the stepping off point for a boat ride to the Isle del Sol (Isle of the Sun). It is a tourist ‘cappuccino town’; one of those places where the tourist buses stop to disgorge backpackers who don’t seem to turn up anywhere between the bus stops and cappuccino cafes and pizza places. These folk simply don’t exist in the flea bitten truck stop towns  sporting one restaurant serving chicken and chips, frequented by this traveling bicyclist,

I therefore spent a day after trekking across the island just stuffing down pizza and lattes. It proved difficult to leave so an extra day is spent wiling away an afternoon WI-FI-ing and carb-loading in a cafe.

From Copacabana (which in reality proved less enticing than it’s name sake in Brazil) it was a lovely ride across to the north shore of the lake towards La Paz. Was lucky enough to happen upon a large fiesta on the road, the women all decked out in their finest bowler hats and multi-layered skirts twirling away merrily and the men-folk spinning (truck-shaped) clackers while shuffling from side to side in a cleverly synchronized dance motion that almost concealed the fact that they were all tanked to the eye-balls. Three brass band’s  blurted away with gusto the sound melding into a vast cacophony of trumpet, euphonium and sousaphone (of no particular tune). One band had six sousaphones, no less! Great stuff! The atmosphere has certainly changed from a few km back up the road and your correspondent had the opportunity to dust off his trumpet skills, adding yet another layer of dissonance to the enthusiastic noise.

A lake-side hotel is the last stop before La Paz and the last chance to look out over Lake Titikaka (refer photos).

The ride into La Paz is a dramatic plunge off the plateau down into the city centre. The atmosphere is relaxed an friendly and it will be a good base for a couple of days where I can stock up for the ride through the remote south-east.

La Paz is also a kind of marker where the Pan-American Highway, which has been tracking south-east from Quenca in Ecuador now turns due south towards the final destination of Ushuaia in Tierra Del Fuego in Argentina  The road from La Paz to the Chilean border promises to be great fun. Crappy dirt rutted roads and the famous salt plains some horrible sand tracks, volcanoes, lakes and then across to The Atacama Desert of Chile. 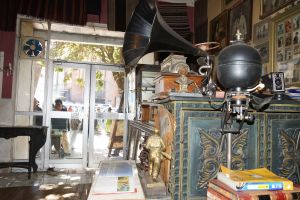 Machu Picchu has to be done. Yes, in order to get there to take ‘that photo’ you have to join the throng of tourists and be prepared to endure a good dose of the local sport of ‘tourist fleecing’ from railway, bus and tour operators, hotel managers and local vendors. But such is the wonder of the view once you top that rise and set eyes on the city for the first time, it’s suddenly all worth while. Mind you, this correspondent slept in and almost missed the dawn which wouldn’t have done at all. But fear not dear reader for I arrived just in time to see the sun rise and get my mug in front of the camera to capture an image with a backdrop that only 152.6 million* people before me have been able to witness.

While in Cuzco I’ve taken full toll of the Irish and English pubs for lashings of sheppard’s pie and Old Speckled Hen ale and scoured the back streets for the finest cappuccino coffee that the city could offer prior to heading back out into ‘Pollo & Papas’ land outside the major tourist centre.

The bike has had some tender loving care while here in Cuzco and is now resplendent in a brand new set of lovely Schwalbe Marathon Plus Tour tyres (thanks to Zach at Co-Motion Cycles in Oregon), so is well ready for the next leg of the trip on to Bolivia. And so in the next few days I will bid a, …well, pretty relieved adieu to Peru.

To mark the completion of The mountain passes of the Andes, here is a new video. You might recognise the music (‘El Caminante’) which is now the official anthem of my Pan-American bike ride.

This morning finds your correspondent in the Starbuck’s in Cuzco sucking on a triple shot latte having just had a huge breakfast at Paddy’s pub. Am surrounded by ever-so-serious looking designer tourists talking earnestly of their impending adventure to Machu Picchu. They seem to have no idea that they are in the company of bicycling touring greatness! How can they be so completely oblivious, all decked out in their matching brand sunglasses and backpacks, that I have suffered through months of endurance, river crossings, huge mountain passes, battle with Big Hats and dogs and bottom cheek welts in order to get to my triple latte? I just overheard one prat talking about how he and his equally idiotic friend are going trekking and just to make it more difficult they are going to fill their designer backpacks with oh-so-heavy water bottles. Oh dear.

I may have been unfair to synchronised swimming in my last posting. On further reflection and on watching a bit of this sport this morning, it is actually much more ridiculous than I had previously implied. There is as much justification for live chicken juggling in a serious international sporting meet than seeing people dangle themselves upside-down in a tub of water and wave their arms and legs about the place, admittedly in a synchronized manner, all the time wearing those tortured grimaces. What the hell is it that they think they are doing before they jump in the pool anyway?? Marvelous stuff!

The Mexican girls did score highly for artistic impression for spitting pool water at each other whilst performing a mock mutual synchronised erotic-strangulation maneuver (which I must admit I found oddly arousing). Have to wonder how the athletes that actually go higher, faster and longer etc view this stuff? It’s making a mockery of serious sports such as curling and synchronized pizza making. Yes, yes, it’s no doubt difficult to do. “I’d like to see you try it?” I already hear some bleating. It is, however, entirely plausible for something to be difficult and ridiculous…simultaneously.

Every shop keeper in Peru continues in an unremitting search for change. If we were somehow able to bottle and utilize the vast amount of human expended energy in Latin America that is squandered in the never ending search for change, the human race could easily have colonized Mars by now.

I had occasion to see the bull fighting in Chincheros a few days back up the road (refer photos). ‘A lone man facing single-handedly a half a ton of angry pot roast’. It was great to see some of the local lads have a go at irritating the bulls, we shouted “Olé!” every time one was gored (Tom Leherer).

Having arrived in Cuzco I will join the throng of tourists wondering around the ally-ways shopping for ridiculously expensive crap. I’m tired, surely, but the legs are feeling strong from the experience of doing all of the mountain passes of the Andes. Now I can happily plough into a mountain pass and churn up hillsides without a hint of the pain and trepidation that used to accompany such undertakings. Half the battle in getting up these things is in the head rather than the legs anyway.